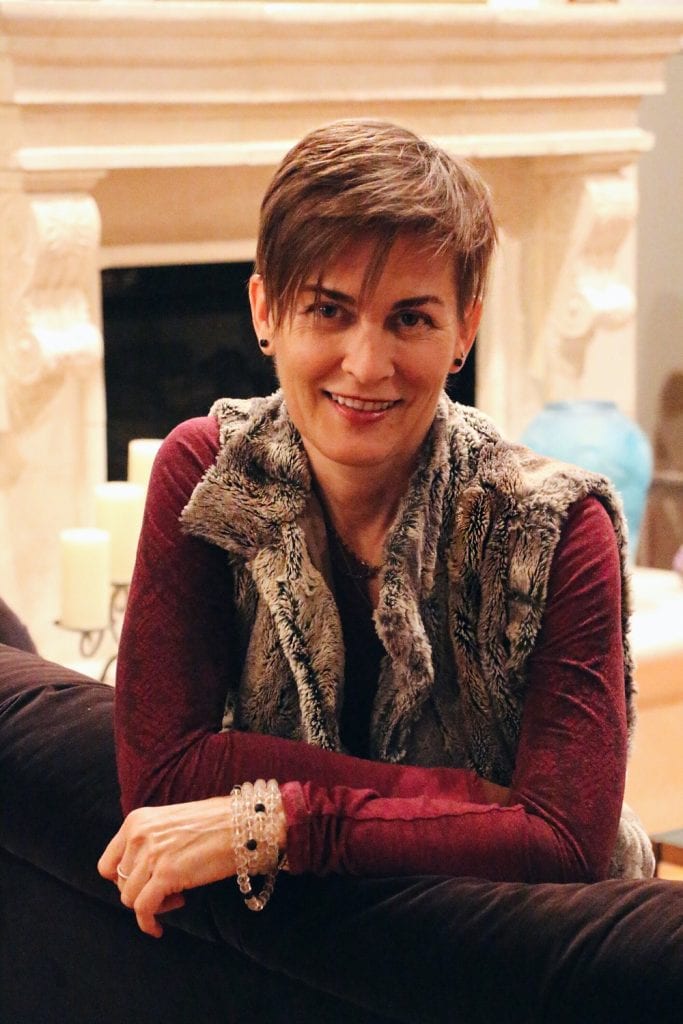 I appreciate Thanksgiving, simply as a day to remember gratitude—always good as a concept, but even better as a practice. Gratitude as a daily practice is mind-expanding and heart-expanding, and research has shown that subjects who practiced daily gratitude had higher rates of cancer recovery than those who didn’t. But sometimes it’s hard to be grateful because it’s unseasonably cold, or because my hair doesn’t look right, or because I’m running late, or all three on the same day, plus… sometimes bad things happen, like divorces and car crashes.

When I told my former spouse that I was no longer interested in being spouses with him anymore, we agreed I would roll out the concept to our 5-year-old daughter by explaining that at my new house, she’d have a best friend and that at his new house, she’d have a kitten. I was driving her from Chicago to Oak Park to pick out said kitten when we were rear-ended heading south on Harlem. Sitting on the curb waiting for officers of the law to finish their paperwork, holding my inquisitive 5-year-old Lily on my lap, patiently explaining what would happen next (which did not include getting a kitten that day), I was shook for sure, because accidents do that, but also quite frankly detesting our rear-ender. I also hated her car and her phone–which was surely the cause of our aborted cat mission (so to speak). Plus, that bad-driving lady should have come over right that second and apologized to us profusely, but no.

When we got home an hour later, I began scrubbing sticky spills from the car’s interior with a wet paper towel. At the moment of impact, I had been drinking a bottle of watermelon juice, which bruised my chin upon impact. Fastidious about car interiors (thanks, Dad), I was incensed at the sheer extent of juice spray that was, well, everywhere. Sticky red drips under the steering wheel column, sticky red drips inside the glove compartment. I cursed that clueless, phone-distracted, bad-driving lady who hit us with her lame-ass car and did not even apologize.

Changing Your Mind to Change Your Perspective

As I scrubbed, a wave of recognition hit me: “Wait. This could have been blood.” An epiphany, followed by amazement at that epiphany, at the sudden, absolute, about-face that I felt viscerally. I felt free, grateful, blown away that I was not cleaning up blood, that my daughter was intact, that aside from a bruise on my chin from the juice bottle, I was intact. Moved to tears, loving every drop of watermelon juice, I silently thanked that terrible, distracted, clueless driver: thank you for hitting my car—so I could truly experience how much every aspect of my existence changes when I simply change my mind.

Gratitude is, simply, a state of mind. Nothing had changed except for my mental focus. Are we equipped from birth to want what we don’t have? So, why can’t we just flip our minds to the opposite perspective, to love what we have? Even to welcome what we don’t want, because it points us toward what we do want? As in, thank you, body that is not fit, for reminding me that I want a body that IS fit. (Let’s start there since this is a fitness blog.)

A friend went on an expedition into the Himalayas, during which Sherpas carried her possessions everywhere, and she just did the walking part. Every time she found a souvenir along the way (rocks, rocks, and more rocks), she felt a twinge of guilt to add one more thing for the Sherpa to carry (which didn’t stop her from putting another rock in her backpack…that he was carrying). But, she said, she’d been to 49 countries in her life, and these Sherpas were the happiest people she had ever met. They sang and prayed and smiled and laughed and welcomed every random rock that increased their load. They seemed happy merely to be alive. Maybe they were taught to think that carrying people’s rocks is a gift from the Universe, just as we privileged first-world people are taught to think we need to accumulate more and more rocks. Either way, it’s merely programming. Why would I not want to run programs that make my cells sing?

That car crash was 18 years ago. Since then, I have realized that all of the seeming impediments in my life, in retrospect, have actually been gifts. It’s just hard to feel that in the moment of impact. But with that premise, I am learning to reroute into gratitude the minute they hit, even if I am blindsided—rear-ended—by them, even if I have no idea how the story will end. Why not arrest and transform any seemingly negative moment to take the reins and adjust mentally, rather than react in the habitual way? Why not take a negative situation, even a negative thought, and assume there is a treasure in the discomfort? It’s easy to feel grateful for what feels good. What about being grateful for that which sucks?